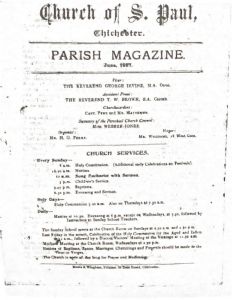 The former parish of St Peter the Great was the largest in Chichester, extending north outside the walls to abut that of Lavant. In the early 19C an area of artisan housing was developed in the parish outside the north gate, known as Somerstown, which put much pressure on the parish church and its vicar. At that time, the church of St Peter the Great was still housed in the north transept of the cathedral.

The solution to this overload was the building of St Paul’s as a chapel of ease to St Peter the Great, for which a site was purchased in 1835 between the New and Old Broyle Roads. The chapel was designed by Joseph Butler, who later designed the nearby Bishop Otter Training College. As built, the church had a fine three-stage tower which sadly was demolished in 1950, accounting for the ugly rendered wall seen above the porch. 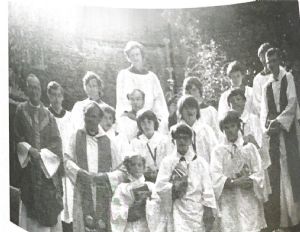 St Paul’s, along with its spacious burial ground, was consecrated by Bishop Otter on 13 October 1836 and the Revd Thomas Brown, who was also rector of St Peter the Less, was appointed its Perpetual Curate. St Paul’s became a parish church in its own right in 1845 when a new parish, covering the area to the north of the city, was carved out of St Peter the Great. Thomas Brown (who is commemorated in a stained glass window in the sanctuary) remained and was inducted as the first vicar. In 1852 a new church of St Peter the Great, to the design of R C Carpenter, was opened in West Street enabling its congregation to leave the cathedral after 777 years. The population of St Paul’s parish grew further with the Edwardian development of Summersdale, and Sunday congregations were large, but by the late 20th C numbers, as everywhere else, began to fall off.

In 1974 the peaceful churchyard that had surrounded St Paul’s was sacrificed for the Northgate Gyratory System for which most of the graves had to be exhumed, but one that was spared was of the Chichester poet Charles Crocker, whose gravestone can still be seen near the east end of the church. Around this time the Bishop of Chichester was considering the future of the city’s remaining churches and, as the congregation of St Paul’s had become rather small, be decided to close it and reunite the parishes of St Paul and St Peter the Great, using the latter’s church. However, an unfavourable quinquennial inspection of St Peter the Great in 1979 changed that decision – St Paul’s, which was in a much better condition, would be the one retained.

The reuniting of the congregations finally took place on 6 July 1980, after a period of 144 years, with Arnold Nicholas as its first vicar and from that time the congregation and the outreach of the church has grown.

[The full history of St Paul’s can be found in St Paul’s Chichester, the church, its Parish and People by Alan H J Green, published by St Paul’s PCC in 2010]