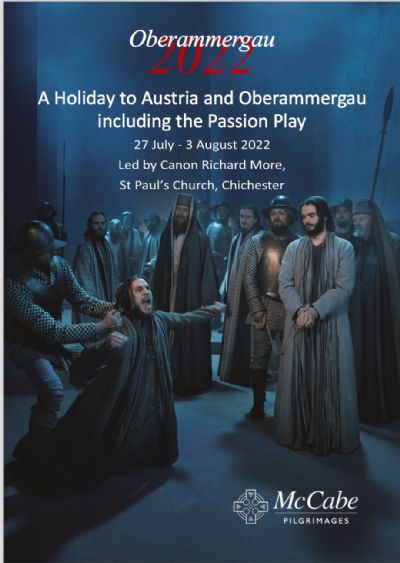 Now for over 300 years, every ten years, the villagers of Oberammergau in Southern Germany, have produced a passion play in thanksgiving to God for deliverance from plague. The play is now world famous, and was due to be produced in 2020. However, because of the Coronavirus pandemic this had to be postponed and it is now to be staged in 2022 This will only be the fifth time that the play has not been staged as planned - there were no performances in 1750 and 1940 and the 1810 production was put back to 1811 and 1920 to 1922.

All the plans for the production in 2020, which were already well advanced, have been transferred to 2022.

Just before Christmas in 2018, the names of the principle cast members were announced.  Over half the village, whose population is about 5000 have volunteered to take part. Jesus will be played by Frederick Mayet, a 39 year old who works in theatre administration. He played the part of Jesus in 2010. He will alternate with Rochus Ruckel a 23 year old aerospace student

On Ash Wednesday many of the men of the village will have stopped shaving. One tradition of the play is that only men who play Roman soldiers have short hair. Wigs are not used and so all the other men taking part stop shaving on Ash Wednesday the previous year.

At St Paul’s we had planned to take a group to see the play last year. We have now transferred these plans to 2022. The dates are 27 July to 3rd August, seeing the play on 2nd August.  It will be part of a holiday spending five days at St Gilgen in the Austrian Lake District, not far from Salzburg, and concluding with two nights at Oberammergau, with top grade tickets for the play. The holiday is being arranged by McCabe pilgrimages

Last year this holiday was fully booked and we had a small waiting list. All those who booked have been given the option of transferring to 2022 and most people have chosen to do so. However, for some this has not been possible, and it means that we do now have some available space.

To reserve a place, please complete a booking form and return it , together with the deposit, to me. You can download the brochure and booking form from the link below, or if it is easier paper copies are available from me or the Parish Office.

For the people of Oberammergau the play is still staged to fulfil a vow made to God in thanksgiving for deliverance from plaque. The 2022 production will surely have renewed significance both for the villagers and all who will witness it.